We just came back from our short vacation in Manila and I cannot wait to tell you what activities we did! Days before leaving my friends asked me why we were traveling to Manila and I always answer them “Why not?” It’s summer vacation and we definitely need a break. Work and all of Aiden’s sports’ activities have been stressful for my husband and I and we really wanted to get away for a couple of days. If only we can fly out to Palawan and have a honeymoon but we have two kids who are active and are always needing attention!

Let’s start with the flight to Manila. We booked AirAsia going to Manila for a night flight hoping that the boys will pass out in the airplane and we will not have a hard time handling them. Two hours before the flight, we were ready to go and was about to call for a taxi when the rain poured on us. Intense, mad, cats and dogs rain! We knew it would be hard to grab a taxi but after a few minutes, we were able to book one through Grab. Growing up my mom would tell me that bad luck comes in 3, so I was already anticipating the 2 bad lucks we were going to get. Not long after that thought, Diversion road started to flood. We were stranded so the taxi driver opted for a different route if you’re from Davao you know how crazy the flood gets.  The taxi driver had to drive all the way through Sasa road so we can reach the airport on time. Luckily (or so I thought) we arrived at the airport in one piece. We were wet and cold but we made it! Just when I thought to have to change routes and almost being late was the third bad luck, our flight was delayed for 1 hour and 45 minutes.

We headed our way to the airport’s child care center because we knew that keeping the kids entertained in a place where people are trying to sleep is not a good idea. Luckily this place had a lot of toys for the kids and there was a small place for us to rest as well. After 2 long hours, we finally boarded our plane just in time for the boys to finally fall asleep. 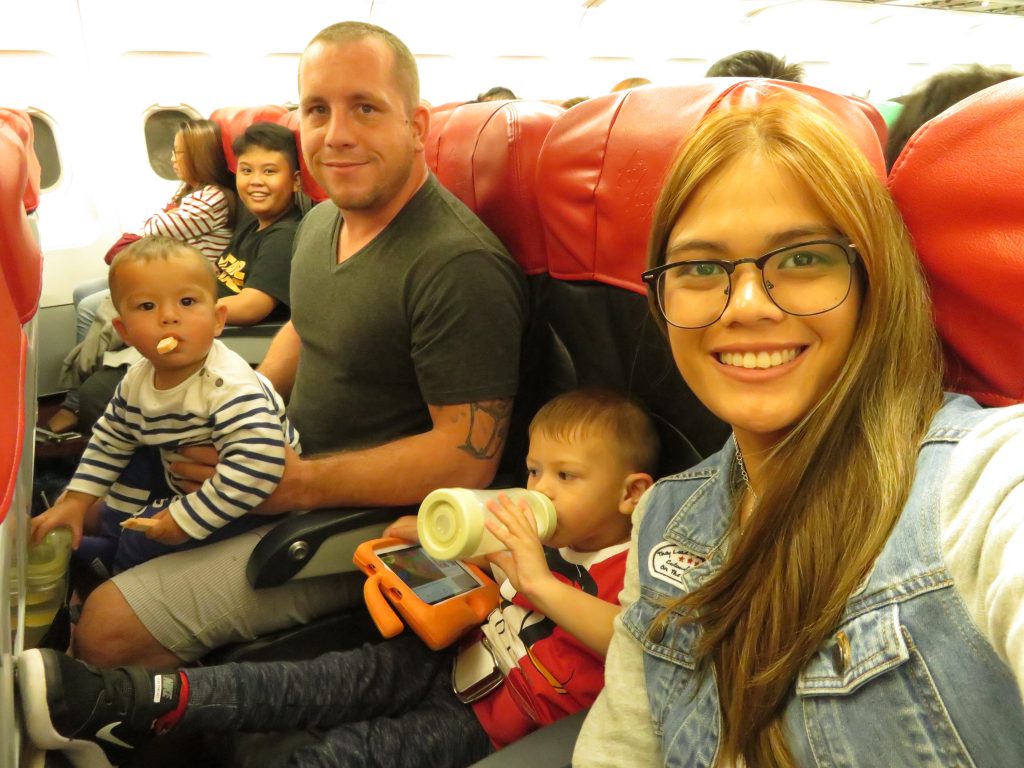 Here are a few things we did in Manila for Day one:

Davao City may have a lot of food options to choose from but Manila still takes the trophy for most diverse food options in the Philippines. This was very hard to process when my husband moved to Davao City. He was used to the different kinds of food in Montréal that coming to Davao was a total change. It doesn’t help that he is allergic to seafood which cuts his food options to half. It was back in 2014 when we had our first vacation in Manila together where he realized that the limited food options were only in Davao City. He went crazy with all the North American, Mexican, Japanese, Indian and Mediterranean food that you can find in Manila. The first meal we had in Manila was Subway, you do not know how much my husband loves his sandwiches. I try to make my own subway at home but he still craves for the original thing. Forgive me if I don’t have a lot of photos of the food we ate we were too hungry that taking photos was just too tasking.

One of the best meals we had in Manila was from Pound by Todd English. We haven’t eaten a proper meal the whole day from Ocean Park because we started that day late. Everyone was tired, cranky and HUNGRY! We decided to take the Grab Car to Mall of Asia where we picked the first restaurant we saw and went for it, we didn’t know if the food was good there or if we would enjoy our meal but we were too hungry to care. To our surprise the food was amazing! I’m not just saying this because we were starving but everything was well prepared and fresh! Their poutine was just to die for! The combination of the french fries, gravy, cheese topped with caramelized onions was heavenly.

Another great meal was from Man Hann Restaurant. It was Mother’s Day and we were meeting up with relatives in SM Megamall where they had already sat down in the restaurant. We were late, as usual, but because the restaurant was popular it took my Aunt 20 minutes to get a table. We are not too crazy about Chinese food simply because a lot of it has seafood which Sean cannot eat but this restaurant proved us wrong. There were so much to choose from and everything we ordered was delish! One dish that I love in particular was their beef with broccoli, it wasn’t sweet nor sour like other restaurants and they were not cheap on the beef slices.

One meal that surprised us was actually from a night of taking- out. We had just got back from the Enchanted Kingdom and were too tired to leave the condo that we decided to have food ordered in. Of course, we were not going to order any McDonald’s knowing that Manila had the Food Panda app available with a lot of food choices. We decided to order from Kenny Rogers simply because we are Nico Bolzico fans! Their chicken did not fail us at all! It was huge! The chicken meat juicy while its skin was still crispy. Their side orders were pretty good too. Aiden finished two servings of Mac and Cheese while Sean wished he had ordered more of their coleslaw. 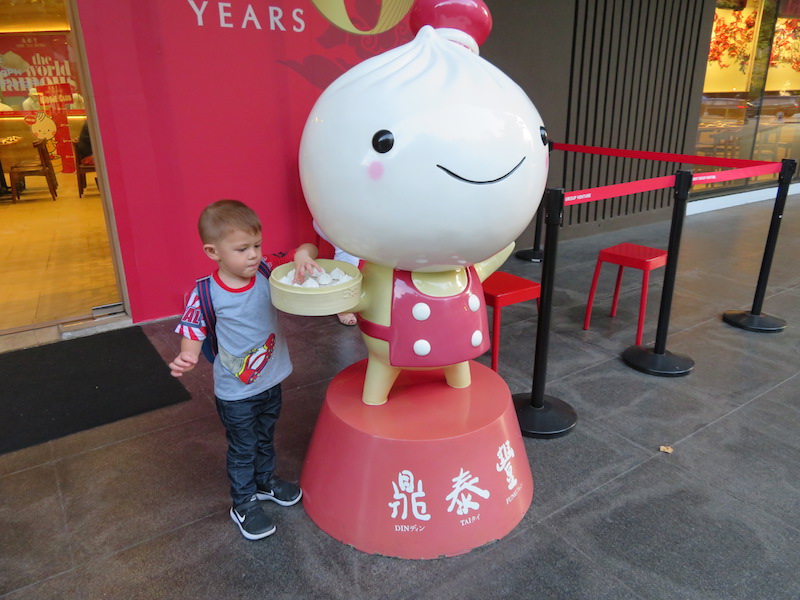 Manila City is known to be the shopping capital of the Philippines simply because they have a lot more stores available than anywhere else. We took advantage by going to stores and shop all day long during our first day. We are not really heavy shoppers because we stick to our everyday casuals but one thing Sean and I love is our sneakers. I was on a hunt to find some Nike Cortez in white while Sean was looking for a new pair of K Swiss shoes. Unfortunately, we were not successful in our hunt but we cannot say the same for Aiden. He was able to come home to a new pair of soccer cleats!

On our first day, we went to the Venice grand canal mall at Mckinley Hill. We’ve seen a lot of bloggers going to this mall and we were interested to see what’s inside of it. The ambiance was great, the food was good, and the location was alright. The grand canal was something both Sean and I have seen before. Of course, it’s a replica of the grand canal in Las Vegas which Sean has seen personally and I’ve seen the same replica in Macao. It was smaller than the one I’ve seen in Macao but still maintained the same concept. One thing is for sure, the canal was a great place to take photos. 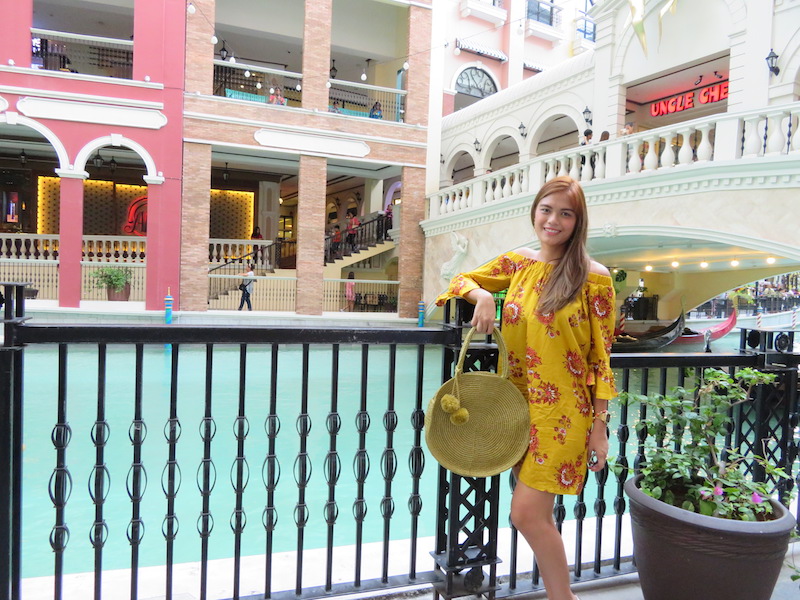 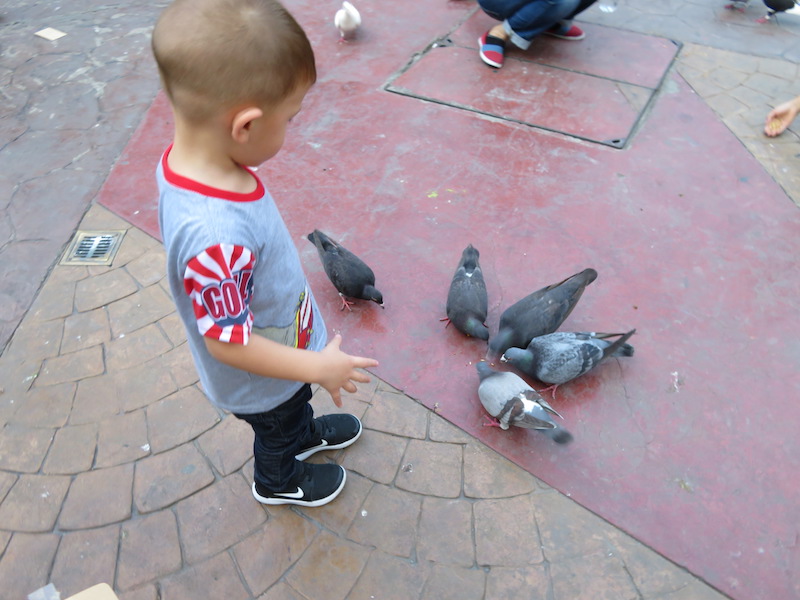 Aiden feeding the birds in the Venice Grand Canal Mall

We enjoyed walking around the streets of Bonifacio High Street and shopping through the strip. Sean loves that area in Manila because it reminds him so much of North America. The boys loved the space where they ran around and burned their energies, and mommy was happy taking photos while we all rest. 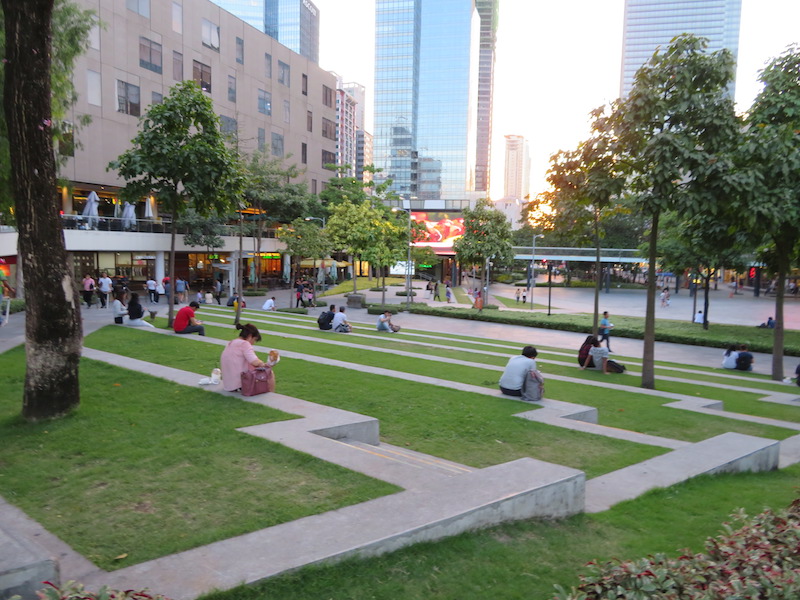 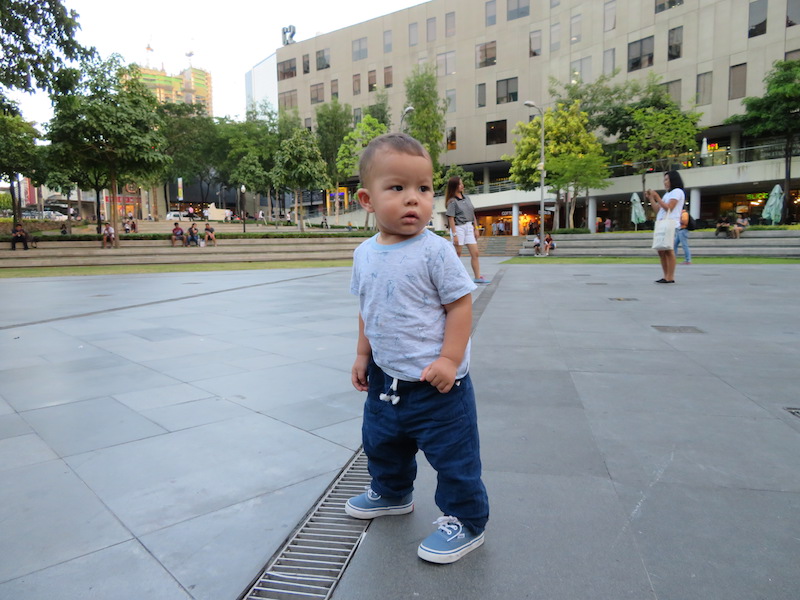 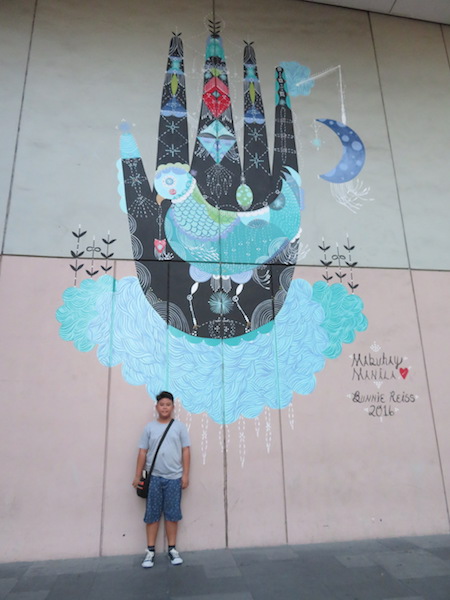 My nephew Santi admiring the art

The main event of our Day one in Manila was the Tim Horton’s Cafe. If you don’t know, Tim Horton’s is the Starbucks of Canada. You can find them absolutely everywhere and Sean has been buying coffee from them for years. I personally love their coffee because everytime my brother comes home from Dubai he would bring us a pack of their brewed coffee. Up until today, I have not enjoyed 3 in 1 coffee sachets because of my conversion to Tim Horton’s coffee. Sean was like a child going on Google Maps looking for the nearest Tim Horton’s he can find. 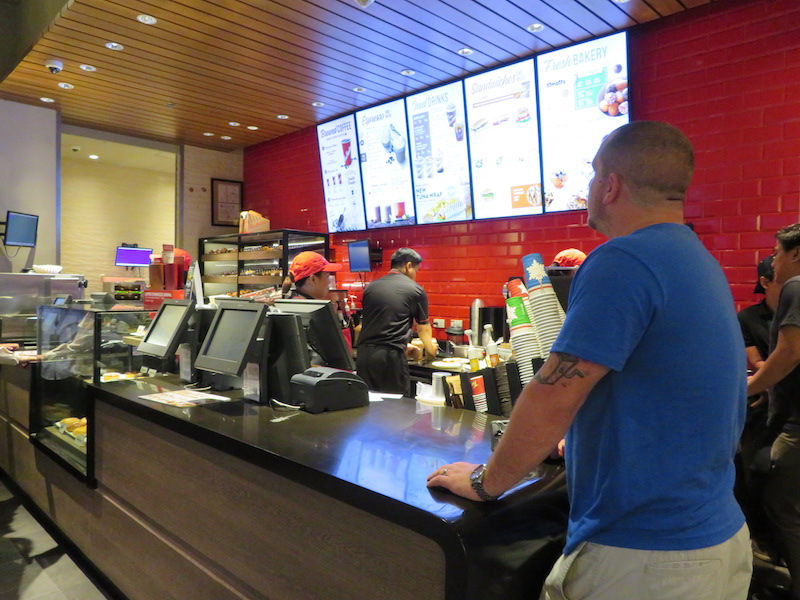 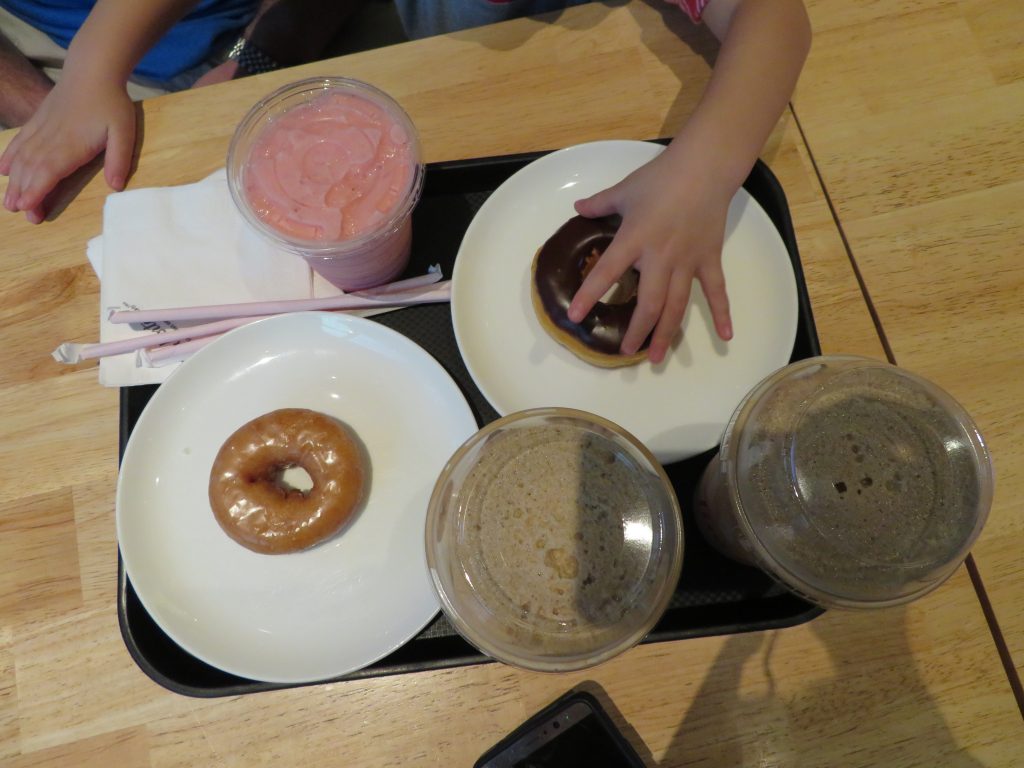 Over-all we had a great time unwinding and relaxing after a tiring plane ride to Manila. Hope you read more of my blogs!

I made a short vlog about or day one. Enjoy!

Congratulations @beatscycledvo for your successful

I strongly believe the saying “Self care is how

Making sure that my 2023 starts with a looooot of

Sunday with my bestie ❤️❤️ #mommyblogger

Have you bought your tickets yet?? Choose from the

3 reasons why I only choose @newlounge.ph ph for m

New Year but still with my trusted brand NÉW Loun